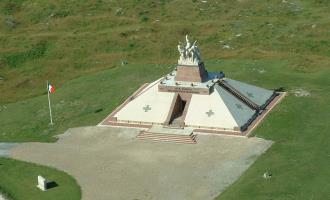 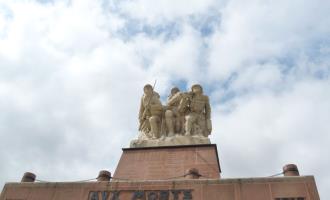 Located near where the farm of Navarin once stood (it was destroyed in 1915), this monument was erected in 1924, at the initiative of General Gouraud to honour the soldiers of the Armies of Champagne who died.

The monument is crowned with a group sculpture depicting three soldiers on patrol, for which the sculptor Real Del Sarte borrowed the features of General Gouraud, Quentin Roosevelt (son of the President of the United States) and his own brother who had fallen at the Second Battle of the Aisne.

If you walk up a few steps you reach the foot of the base, where you can admire a vast panorama of what was once the front line of Champagne. The preserved site still bears the scars of the fighting: trenches, communication trenches, craters...

Inside, in a burial crypt, lies General Gouraud surrounded by the bones of 10,000 soldiers.